There is loads to discuss in this news post, so let's get started.

Over the years I've tried to make sure that regardless of your needs you could find a fitting plan at Bytesized. I offered managed dedicated servers for those whom wanted their own hardware, the +Elastic plan for those who wanted to build a box with dynamic resources and virtual servers if you just wanted complete access to the server. However; after years of adding new plans to the line-up things slowly became a mess and people were often confused as to which plan they would need to achieve their hosting goals. That's why I have decided to take a real good look at the plans, what they offered and what we gained from them and really get into the essentials of what we at Bytesized are about. Today I'm announcing the cancelation and grandfathering of some of our plans, which you can see below.

We will stop selling dedicated servers as of today. I still love this plan to bits but financially it was always struggling. The margins on these were so small that it only takes one server sitting empty to take away the profit of ~10 sold servers. Leaseweb also increased the prices of the existing hardware for us by 4% every year since the introduction of the plan. The bottomline is that it's impossible for us to make a profit from selling the plan. All existing +Dedi servers will be kept online until members cancel them so nothing will change for existing +Dedi members.

I had very high hopes for the +Elastic. I was trying to create a plan with a low base price so users could tweak the various specifications to their own needs, sadly that wasn't the case. The majority of users stuck with the default specifications which made for a rather lacklustre experience. There was also a very high churn rate for this plan, meaning people were not really happy with the experience it currently offered. We are all about the best possible Plex experience and this plan, in its base form was just not that. I am closing down the service on the 1st of August and at that time any remaining days will be converted to Bytesized credit and added to your account. If you want to be moved to a +Stream just raise a ticket and we will migrate you with your apps and data.

The VPS is a very simple story; they simply did not sell well. I tried making various variations but they never took off and I think it makes sense. We are trying to build the best Plex experience and an unmanaged virtual server just does not really fit that narrative, Virtual Servers are not the reason people come to Bytesized.

I wanted to give you some updates regarding the Flex Disk system. For those of you that don't know yet, the Flex Disk is a flexible storage solution that you can attach to your +Stream plan to increase it's storage capabilities on the fly.

Removal of the Beta tag

Even though it's not everything we dreamed it would be as we wanted to allow torrent operations from the disks, We are happy with the state of the Flex Disk. So we are removing the Beta label and making it visible on the website at all times. Go check it out if you haven't yet :)

We have developed a Deluge plugin to make it easier to automate the workflow of Filebot and storing files on your Flex Disk. With this new plugin Deluge will now automatically copy files to your Flex Disk after they are downloaded and run Filebot on them. This way you can remove the torrent and it's data whenever you want while still having the content available for Plex. It also comes with whitelisting support based on labels for both the copying files to the Flex Disk and for running Filebot on said files. This will mean you will have more granular control over when Deluge should take certain actions. The plugin has support for both the web-interface and the thin-client GTK interface.

This plugin replaces the current "executor" plugin. Every new installation of Deluge will have the plugin enabled by default. If you want to add it to an existing installation you can download it here. Be sure to also disable the execute plugin. 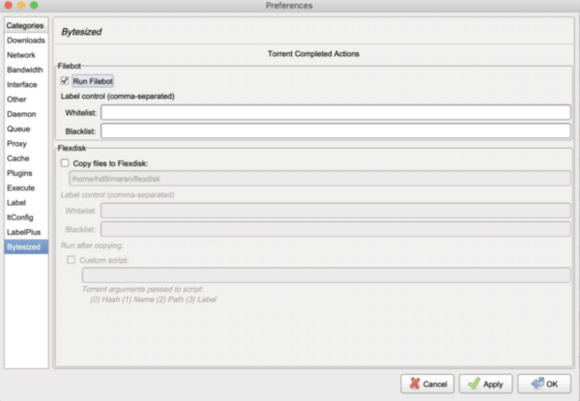 That's it for today, as always feel free to post your thoughts in the comments.