Latest release that supports Java7, is 4.2 at this time. This is also the last version that has no licence charges. Due to licensing structure that Filebot opted for (per user fee), we are unable to offer newer versions of Filebot created after introducing the licensing fee.

Filebot is no longer the default app. Olaris-rename is now the default. If you deployed your box after the 1st of December 2019 then unless you installed Filebot manually this page is no longer relevant.

Added a note about Filebot licensing.

Ask about extraction during client installation to forgo manually editing after the fact.

Disabled automatic extracting of content. Can be turned on again by changing skipExtract=y to skipExtract=n in the wrapper for either Deluge or rTorrent.

FileBot is the ultimate tool for organizing and renaming your movies, tv shows or anime, and music well as downloading subtitles and artwork. It's smart and just works.

What do we use it for?

We use FileBot as a way to make it easy for Plex to recognise your content so there is a higher chance Plex can play it.

When a download is finished Deluge will tell Filebot to work it’s magic on the download, FileBot will do try to achieve the following things.

You can compare a symlink to a shortcut to an existing file in linux. Because it's a shortcut no extra space is being used even though the 'file' exists twice on your filesystem. And because it's just a shortcut you can name it anything you want without disturbing the seeding torrent.

This does mean however that when you delete the torrent via Deluge you still need to delete the version that Filebot made for you in your media folder. You can do this via PyDio or FTP, SSH.

The default postprocessing script for Deluge is olaris-rename. If you want to use Filebot, use an editor to edit the filebot.py script in the ~/.config/deluge directory and in the call_filebot() function, change the cmd variable assignment to the following:

We added Filebot as an app for quick fix of these issues which you can install via Install Application button. You will need to buy a license from Filebot which you can find in their home page. 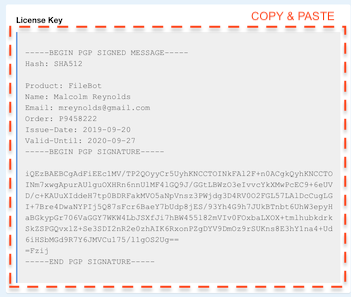 You need to copy/paste the complete file and it needs to be in this format. If you copy paste only the half of it, filebot will not be activated. Also if you copy/paste it and all text is in one line, again Filebot won't accept it as a proper license.

To verify if the license is installed correctly run the following command:

We build wrapper files to be used by Deluge and rTorrent, they can be found in the following locations.

Manually parse a folder or files

If that fails try the following options.

Using Deluge wrapper when your DIR has spaces

Checking out what Filebot is doing

Sometimes symlinks are not created, I recommend you view the log files in this instance which can be found in.

This will often tell you why this is happening.

Sometimes when Filebot misses a file you may want to manually create a symlink to the file yourself to try and get it to show in Plex. To do this you'll need to cd into the directory you want to put your symlink in, usually something like ~/media/Movies.

Once you're in your chosen directory you'll want to use this command to create a link to your file/folder. Note: you must use the format ../../ rather than an absolute link like /home/yourusername/, otherwise Plex won't be able to follow the link from the container it runs in.

Manually creating symlinks when your DIR has spaces

As with manually parsing a DIR with spaces, to create a symlink to a directory with spaces, you also need to wrap the DIR/Filename in qoutes. To do this you'll need to cd into the directory you want to put your symlink in, usually something like ~/media/Movies/Folder.

Note: and you must use the format ../../../ rather than an absolute link like /home/yourusername/folder, otherwise Plex won't be able to follow the link from the container it runs in.

Change to directory with spaces...

Add these two options to your filebot configuration file:

Only process video files larger than the given number (in bytes). Defaults to 50 MB.

Only process videos longer than the given number (in milliseconds). Defaults to 10 minutes.

By default we setup Filebot to extract to $HOME/torrents/extracted instead of extracting into the folder of the compressed files. However a recent Filebot upgrade has changed the case sensitivity of this option, therefor it won't work without like this any longer.

To get extraction back to our defaults you can edit the filebot wrapper (see paths to these files at the top of this page) and change --def extractfolder to --def extractFolder. Running Filebot on new files will now use the correct folder again.

Edit your wrapper file, paths specified above, and look for the SUBLANG in rTorrent or subtitles change en to an other language or false if you don't want to download subtitles. In addtion; To download multiple languages, separate the language codes with a comma. (For example 'en,fr,nl')